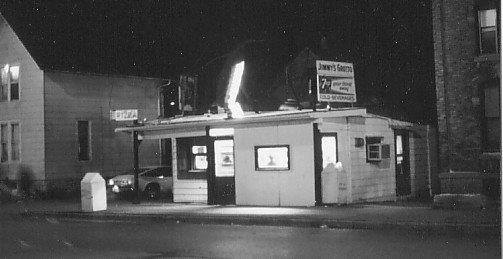 Jimmy Rucci had been tending bar in downtown Waukesha for several years, when he and his wife Rosie decided to try their hands in the restaurant business. So, to the surprise of their neighbors, they tore the fourth story off their brick home and reassembled it next to the house. Little more than a small brick shack, Jimmy’s Grotto opened for business August 15, at 311 E. Main St. The first day, they sold nearly 200 Italian Sausages.

buy dapoxetine ireland Jimmy turned over the business to his son-in-law, Rocky Werning.

doxycycline buy online Rocky’s brother Dick joined him. Until that time, Dick had been a foreman at AO Smith Corp. When Rocky left the Business in 1972, Dick and his wife Bobby ran the Grotto by themselves for a short time, before taking on Dick Obodowsky and his wife Lucy as partners. Dick O. had been a chef at the Village Pump in Brookfield before then.

Rosie always had something good cooking, and often stopped by with something for the workers at the Grotto to try. One of those items was a pastie which consisted of tomato sauce and Ricotta cheese in a light crust. As good as they were, we had to start selling them. So, before the year was out, the first Ponza Rottas were served at Jimmy’s Grotto. It wasn’t much of a success at first, during the first couple months we only sold a couple a day. But it didn’t take long for word of mouth to travel and within a year they became one of our best selling items.

We opened a second restaurant at 421 S. Grand Ave. Waukesha, where before that time you could find Kaske’s Grocery.We were honored by Waukesha’s own “The BoDean’s”. In their first album, among the list of the “Special thanks to” they honored us by including Jimmy’s Grotto. We remember when they were just a couple of wild young boys running around the neighborhood.

Time to take the Ponza Rottas on the Road! Making each one by hand, we started packaging and selling Ponza Rottas in local grocery stores. Since that time we’ve expanded to include stores as far south as Kenosha, as far north to Port Washington, and as far west as Madison. Milwaukee Magazine awarded us the “Most Unusual Pizza in Waukesha County” in it’s annual “The Best Of” issue.

Gobbling and slurping at Jimmy’s Grotto

Doug and Holly have worked together since 1988 before their marriage.

On the move. Sad yet excited, we closed the doors of our humble 352 sq ft building, and opened the doors across the street in our newly completed restaurant. It was fun listening to the younger customers tell us “Well it’s about time you tore that thing down!”, and have our older customers complain “Now what did you go and do THAT for?!”. Due to the move, there were many articles about the Grotto in both Waukesha and Milwaukee newspapers early that summer. There were lots of great stories and memories poured into those articles. We appreciated the special attention.

Another first! The Taco Ponza! Such a success in the restaurant, we will soon begin production in the wholesale department and add them to the list of items we carry in the grocery stores. Also, we added Inferno Wings and Fiery Fingers to our menu. If you like your food hot, you have GOT to try these!

Jimmy’s Grotto sees some changes. Our south-side store is sold and wholesale production is stopped during a consolidation to our newest restaurant located on E. Main St.

Jimmy’s Grotto changes ownership as Dick and Bobbie Werning and Dick and Lucy Obodowski enjoy a much deserved retirement. We congratulate them for 32 years of hard work making Jimmy’s Grotto such a success, and wish them all the best for the future. The new owner is the long time Store Manager Doug Ciampa, so you can be sure that you will still be able to enjoy the same great service and favorite food that you have enjoyed at Jimmy’s Grotto. We welcome him and bid him a big congratulations on his new venture.

April 1st marks the one year anniversary since the new owner, Doug Ciampa, took over. And thanks to our customers who have made our success possible, you guys are great. 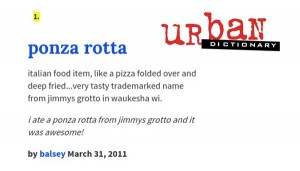 What the heck is a Ponza Rotta?